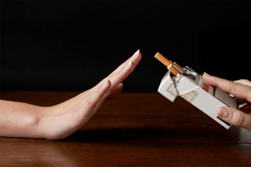 If you’re a smoker and have been wanting to stop, today is your day to do just that! Millions of people across the nation will take part in the Great American Smokeout, a day where tobacco users are encouraged to go 24 hours without smoking a cigarette.

Tobacco use is the single greatest cause of premature death in the United States. Lung cancer happens to also be the number one cause of death from cancer, according the American Cancer Society.

The Great American Smokeout is an effort by the American Cancer Society to encourage smokers to give up their possibly deadly habit.

Celebrated on the third Thursday of November each year, the Great American Smokeout was coined in 1971 by Arthur P. Mullaney. He created an event that asked people in Randolph, Massachusetts to give up their cigarettes for a day and donate the money to a high school scholarship fund. Eventually the concept caught on and spread like wildfire across the nation.

More than one million children will begin smoking this year and one-third of them will die from their addiction. About 90 percent of all new smokers are 18 years of age or younger. Once a child or teenager has begun smoking, it is likely that they will become addicted without realizing it.

According to the Center for Disease Control and Prevention, an estimated 16.6 million of today’s children will become regular smokers and over 5 million of them will die from it. In Texas alone, approximately 400,000 children now under the age of 18 will die because of smoking-related illnesses, such as lung cancer or heart disease.

To quit permanently, smokers need support from family, friends and co-workers. The American Cancer Society offers the following tips for staying off cigarettes during the Smokeout:

SRJ Marketing Communications has specialized in rural and community healthcare marketing for more than 20 years. During that time, we’ve learned that educating our communities about important health issues is critical to extending our lifespan—and quality of life at that. With that said, we’re happy to provide this PSA. Share it with your friends.