Offering killer deals: getting people in the door 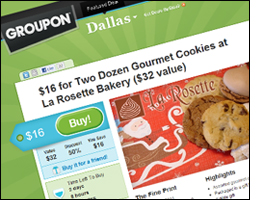 Offering killer deals: getting people in the door

I recently got an e-mail from online coupon website Groupon promoting a deal for half-priced tickets to the zoo.

The zoo! I don’t know how long it’s been since I last went to the zoo—or even thought about going—but I can tell you I very seriously considered buying a pair of tickets. I wasn’t alone either. In the end, more than 12,000 people bought tickets through Groupon.

Groupon, which offers users daily coupons, has grown from a humble startup website to an online promotional force that is taking the marketing world by storm. It just goes to show how offering great deals can mean new customer opportunities.

The way it works isn’t terribly earth shattering. In fact, it’s much like how stores put coupons in Sunday newspapers to attract potential shoppers, the logic being that by offering a good deal on, say, coffee, people would go to the store to buy coffee and walk out with other stuff, too.

Every day, Groupon finds businesses that agree to offer coupons for heavily discounted services or products and posts them on its website.

Users have a certain timeframe to purchase coupons, and the deal is only honored if enough people buy in. Groupon then takes a percentage of the revenue businesses collect from redeemed coupons.

To be clear, most businesses don’t churn a lot of profits from the business they get from the deals. In fact, a lot of businesses barely break even or actually lose some money. In terms of long-term business, actually getting people in the store to try out a product could pay off big time. It can also expose people to your brand who normally would not have known about it.

Coupons and one-time deals are especially effective for potentially ongoing services. For example, a gym might offer a half-priced Yoga class. When people show up to the class for the discounted price, some of them are likely to sign up for more classes or packaged gym memberships. It’s all about getting people in the door!

Internet advertisement can go a long way toward driving customers to your website and, eventually, your business, but promotional deals can be very effective at bringing in new customers.

Offering a special promotion can have to effect of enticing someone to try your service who might not have otherwise been interested. A low price gives a customer the feeling of there being little risk involved in trying. If the customer doesn’t like the service, it’s not a big deal because he or she didn’t have to spend the full price anyway. But if it so happens that the customer finds the service worthwhile, it’s likely he or she will come back for more!

The great thing about an online promotional deal is the simplicity. While Groupon is extremely popular, it might be simpler to offer people discounts directly, such as through an e-newsletter or offering downloadable coupons on your website.

Groupon, and the many similar services out there, is just idea you might want to consider adding to your 2011 marketing communications strategy.